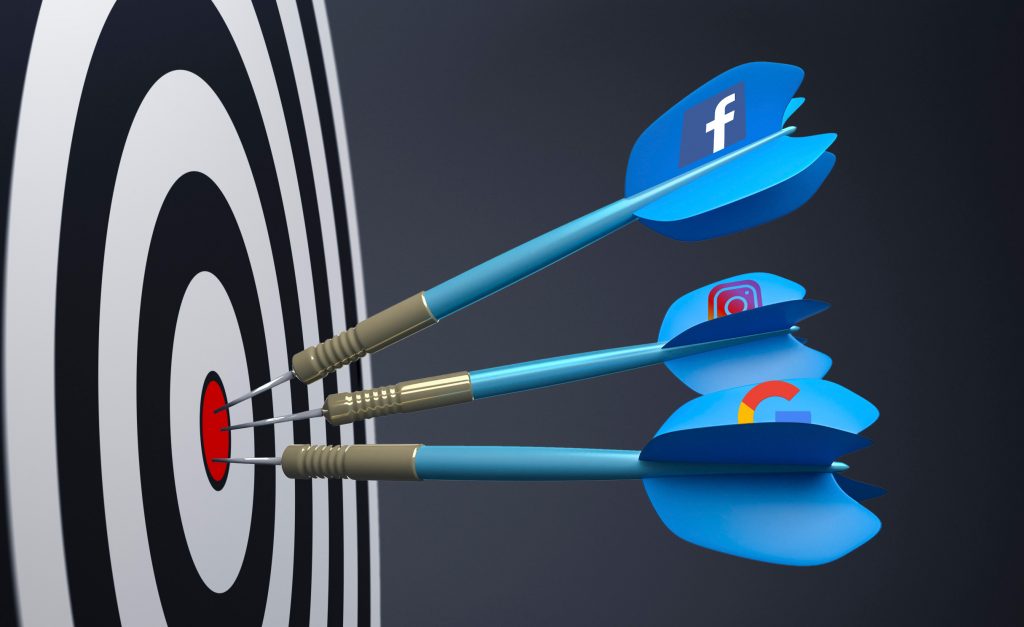 The Business of Apps: Three Fateful Rivalries Show Why the Idea Itself Matters Less Than You Think

A billion-dollar app idea? Not likely.

Before every intellectual property (IP) attorney in the world begins calling to argue otherwise, let me clarify.

There are nearly 8 billion people on this planet. Any idea for an app has likely been thought up hundreds of times — in independent circumstances, around the globe, in different languages, and by people other than you.

But, if ideas are truly “cheap,” what factors actually determine whether an app will succeed?

If you do in fact have a great idea on your hands, you need to understand that you consequently have a responsibility — to yourself and your fellow stakeholders, certainly, but also to society — to bring that idea into the brilliant light of day.

And the way you do that? Meticulous planning and sublime execution.

Here are three tech rivalries from the past decade in apps, to prove why execution – not the idea itself — is the key ingredient for success in technology.

Myspace was a revelation in the social networking space in the early 2000’s, with a hip vibe and gigantic network effect some thought would prove insurmountable. Certainly, News Corp thought so when it purchased the company in 2005 for $580 million, an astronomical figure at the time.

But in the years after Facebook (or Facemash, as the original version was called) sprouted out of Zuckerberg’s Harvard dorm room, the Myspace stranglehold on the social networking market began to loosen.

How did this happen?

Conceptually, Myspace had the right idea. But the execution left a lot to be desired. Constant bugs, inability to moderate user content at scale, and the lack of an intelligent feed algorithm, were just several symptoms of an inability to execute against an otherwise good idea. 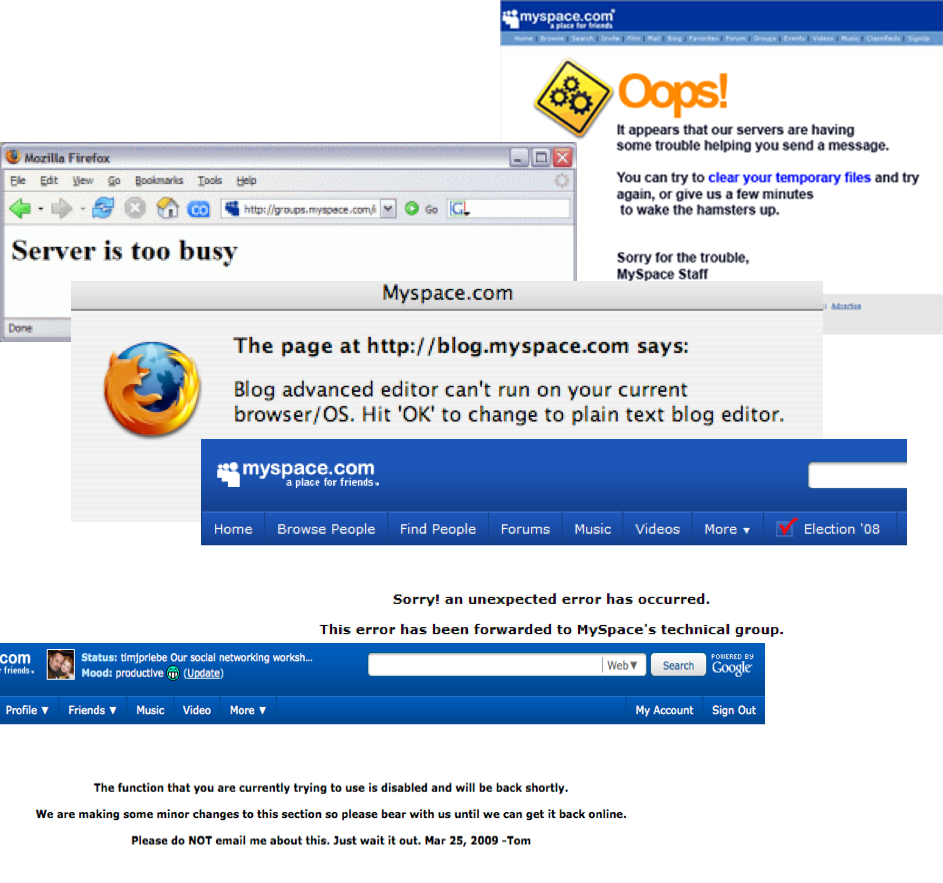 Error messages were a common sight in Myspace’s heyday.

You see, the root of the trouble was that Myspace’s founders and main stakeholders were from the entertainment world, far removed from Silicon Valley and the Internet.

When Facebook emerged and began innovating to bring new user experiences to market with precise business and technical execution, making it easier for users to connect and engage in more meaningful ways, Mspace simply couldn’t keep up. It was forced to pivot fully into focusing on entertainment and music.

As a result, Myspace saw the once unthinkable happen: a mass exodus of its users (and consequently, its advertisers) over several years.

This culminated in the once gigantic social media platform’s sale in 2011 for just $35 million, or less than 0.001% of Facebook’s current market capitalization.

When Snapchat first burst onto the scene in 2011, it hooked millennials and Gen Zs alike with its ingenious premise – the ability to have messages disappear into the ether after being viewed.

The idea was admittedly an excellent one, which explains Snapchat’s meteoric rise versus serious competitors like Whatsapp and Facebook Messenger – at least at the time.

Fast forward to 2018, and Snap (the company behind Snapchat) is bleeding away its market value on the heels of a poorly executed UI redesign that has alienated Snapchat’s most loyal users and is now causing a Myspace-like migration.

It can be hard for those outside of the software industry to understand how a UI redesign could move the market the way it did. The easiest way to understand this is to boil possible user response down to 1)love, 2)indifference, or 3)hate.

Snapchat’s redesign seemed to instill actual hatred in many of its users.

Case in point, Kylie Jenner seemed to actually cause Snap to lose more than $1B in market value with a single tweet, in which she disclosed she was no longer using Snapchat following the “ugh”-inducing redesign.

Around the web, there was abundance evidence that millions of others also hated the reimagined user experience forced upon them: 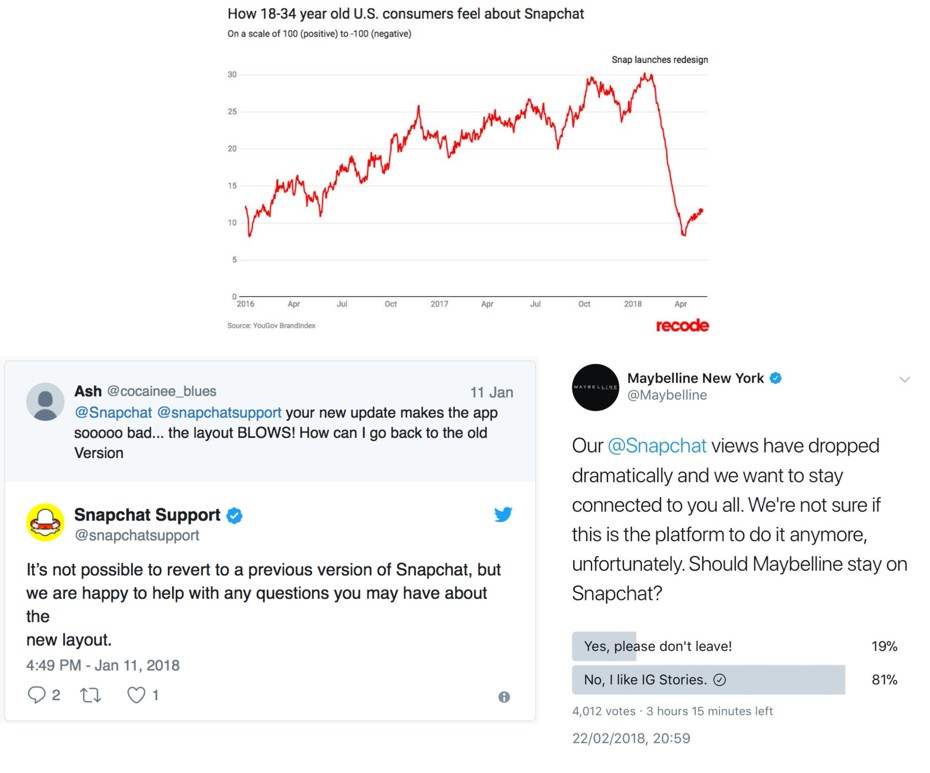 Enter Instagram, the Facebook-operated company that also focuses on photo sharing. With Instagram’s well-executed user experience and, as of 2016, the ability to send photos and messages that disappear, the reasons to stay on Snapchat are quickly dwindling along with Snap’s stock price.

Just about every Apple fanboy I’ve ever talked to is willing to admit that the first release of Apple Maps in 2012 was absolutely atrocious.

Prior to the launch of Apple Maps, Apple devices such as iPhones had been using Google Maps for mobile mapping and directions. By all accounts, users were happy with Google Maps.

Yet, that didn’t stop Apple from moving forward with uprooting Google Maps from iPhones and creating their own version of the popular map app.

I’m sure it sounded great in the board room.

“Let’s rid ourselves of our dependence on Google. We can design something bigger, better, and more beautiful. We’re Apple!’

Yet, by most accounts, the app launch turned out to be a disaster.

Critical information (names of buildings, for example) wasn’t available, points of interest were often mislabeled, and directions for public transit were glaringly absent. Outside of the US, many users opened Apple Maps and literally saw blank screens. 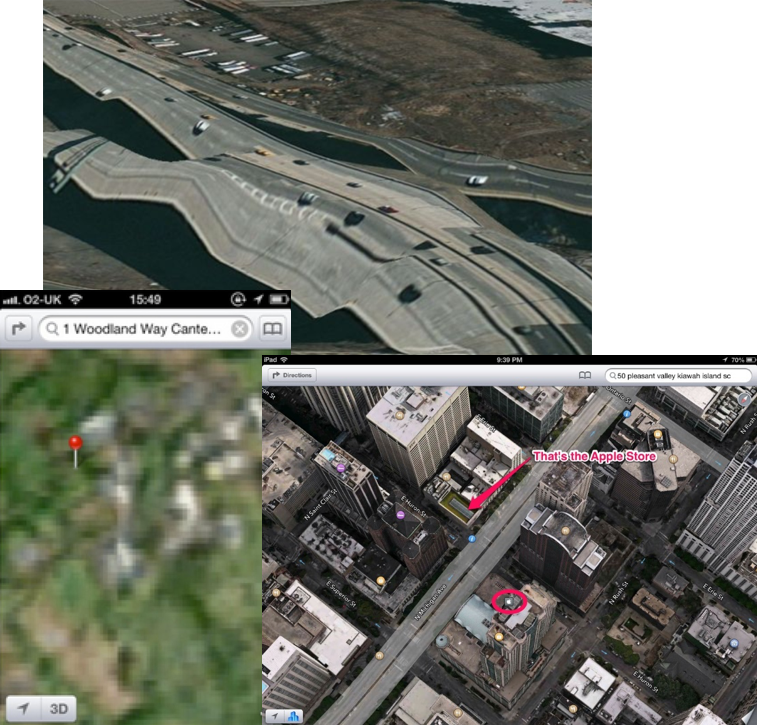 The launch of Apple Maps in 2012 was an unmitigated disaster.

As Apple quickly learned, a lot of work goes into building a robust map application beyond the brilliant UI/UX design Apple is deservedly known for. Apple lacked the necessary big data, machine learning, computer vision, and other technical subject matter expertise needed to execute against what was otherwise a sound business strategy.

Since that debacle, Apple has managed to slowly build Apple Maps into a respectable alternative to Google Maps, at least on its own devices.

But the fact that there are still roughly seven times more people using Google Maps than there are using Apple Maps (Statista, April 2018) reinforces the importance of a strong first impression.

What about the 99.9% of businesses that don’t make headlines?

The case studies above are examples of industry giants duking it out, with one inevitably left in the dust, wondering what could have been. In each of these cases, the loser could still walk away proud, perhaps helped by million-dollar paydays in the rearview mirror.

When we’re talking about an app startup or an SMB, the quality of execution could mean the difference between a billion-dollar unicorn and an app that struggles to break even or produce positive ROI.

According to CitrusBits CEO, Harry Lee, outstanding execution in the mobile app space is strongly associated with an app’s user experience.

“The ‘million-dollar’ idea boils down to just a starting point. Entrepreneurs and product managers need to consider their users’ needs in crafting user experiences that aren’t just viable but are also ‘sticky’ – something users enjoy returning to time and time again. A common pitfall for many startups we’ve talked to occurs when an idea is rushed to market – often chasing a first mover advantage – only to have potential users turned off by the poorly-designed or even buggy apps they’re faced with.”

With small businesses and startups, just as with the Facebooks of the world, execution trumps ideation every time.