Why is Everyone Developing Virtual Goods on the Popular Roblox Metaverse? 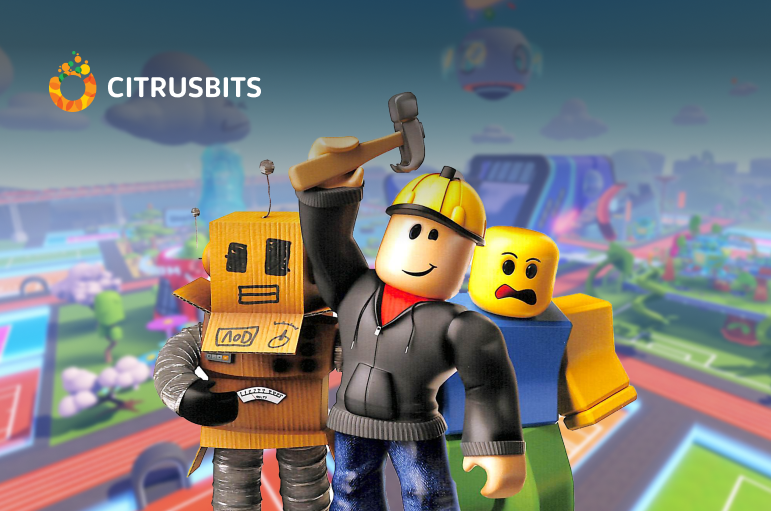 When I was a kid, my friends and I would often obsess over games like Super Mario Kart and Street Fighter. Good times. How did we get to the point today where gaming now has to happen online?

Well, Roblox saw the trend towards online gaming accelerating and took it a step further, taking the virtual world by storm in early 2015 when it launched an accelerator program to help the next generation of game developers succeed on its platform.

Fast forward to 2020, when the pandemic hit the world, and restricted physical interaction and stay-at-home orders drove people into online worlds. And as the most immersive online world of all, Roblox enjoyed a massive ascension. While parents were Zoom-ing, their kids were flocking to this online gaming universe, logging more and more hours, adopting virtual pets, building virtual houses, and befriending new people every day.

From roleplay games to Counter-Strike simulators, to adopting and raising your virtual pets and fighting waves and waves of zombies, Roblox now has over 40 million games of all sorts for you. And we all agree that we have witnessed or even experienced obsessing over them at some point.

According to statistics, Roblox has 48.2 million daily active users (DAU) who play for an average of 2.5 hours per day. The monthly active users (MAU) of Roblox, as of April 2021, amounted to 202 million. To put this into context, this number has surpassed the most successful game in the world, ‘Fortnite’, with 80.4 million MAU.

The transition from the physical to digital worlds has led to a new phenomenon – the formation of digitally native nations. Having a presence and ownership in these digital nations has a considerable market with greater potential than the real world.

While there might be peaks and valleys in this emerging market, it is safe to say that the ideas behind Roblox’s success will continue to evolve.

But What is Roblox and Why does Gen-Z love it?

Roblox is actually a very early version of the Web 3.0 Metaverse revolution, founded in San Mateo, California, back in 2004. It is a vast online gaming platform and game creation system developed by Roblox Corporation. Users can program and interact in what its creators describe as “immersive 3D worlds”.

As Roblox itself explains, its mission is to build a human co-experience platform that enables shared experiences among billions of users. Every day, millions of people around the world have fun hanging out with friends in immersive digital experiences. All of these experiences are built by the Roblox community, made up of over 9.5 million creators.

Before we talk about how Roblox is ‘Gen Z’s metaverse’ and why they love it, let’s dissect the metaverse in Roblox. As Roblox is regarded as an early metaverse, the two go hand in hand. Still confused? Let’s go through it.

Wondering what the metaverse is? Simply said, it is a new form of the internet comprised of 3D virtual worlds where you can explore, socialize, own an avatar, and personalize it to your liking.

The freedom to be or do anything you want makes Roblox an excellent example of the metaverse, hence it’s called the Roblox Metaverse.

It shouldn’t be surprising that a social and tech-first game would become popular among digital natives (the Gen Zs). The younger generation is leading the way in Roblox, as 67% of Roblox players are 16 years of age or younger.

There’s still so much confusion about what the metaverse actually is. It is not a standalone game or application, but an intersection where the physical and the virtual world meet. Roblox is like a testbed for this space, as it allows endless creative freedom while having its own ecosystem, communities, and economies. It appeals to Gen Z because it is like a blank canvas for them to let loose their creativity, build virtual experiences, and socialize.

Moreover, Roblox is winning over a lot of role-playing games (RPGs) from a user’s perspective as it does not require immersive headsets to access. You can access it from anywhere anytime through your smartphone.

Now that we’ve developed a basic understanding of the Roblox metaverse, let’s dig into its ecosystem.

Brands can Thrive Within the Roblox Ecosystem

Roblox has a brilliant self-sustaining ecosystem when it comes to creating items and games. It doesn’t just focus on a single game or virtual experience, which startups tend to do in order to achieve product-market fit – a common requirement to become an eventual unicorn.

Instead, the focus is on building the platform, and Roblox then empowers users to develop different products that each have the potential to garner microtransactions on the platform. In return, Roblox takes a small portion of the Robux of whatever is sold, just like how Apple takes a cut from App Store transactions.

Each world in Roblox is built around the concept of interoperability and the scaffolding that surrounds it. As such, the developers add value to the platform and enhance the overall user experience by building immersive experiences on Roblox. Roblox, in return, decided to compensate them by launching the Developer Exchange Program, which earned 8 million certified creators 329 million dollars in 2020, a staggering 217 million dollar increase compared to 2019 earnings.

Roblox metaverse has not only grabbed the creator community’s attention but has naturally piqued brands’ interest too, as the user activity keeps elevating. According to Roblox’s chief business officer, Craig Donato, there’s a natural trajectory for brands to grow on the platform.

To get in on the act, brands simply have to create virtual merchandise in Roblox. Gucci was one of the first brands to use this medium, launching virtual items with great success. Interestingly, Gucci’s digital bags were at times more expensive than its physical bags in the real world. The Dionysus bag in Roblox was resold for 350,000 Robux, or about $4,115 ($715 more than its price in the physical world).

Similarly, DC Comics and Warner Bros. created a Wonder Woman game on Roblox in the summer of 2021, which allowed players to use Robux to purchase Wonder Woman accessories for their avatars.

Nike also did not take long to realize the platform’s potential and created NIKELAND – a free digital space for Nike fans to connect, create, share, and compete in various mini-games. It is enhanced with real-life movements to attract more users and a digital showroom that allows users to dress their avatars with exclusive Nike products. Nike’s decision to embrace the metaverse is already paying off as Nike has reportedly exceeded its own revenue expectations by making $10.9 billion in its third quarter.

We also witnessed Vans create a 3D skate park inside Vans World in Roblox to bridge the gap between virtual and real-world fashion and sports. Their goal was to bring skateboarding, fashion, and community together in a 3D experience. One fascinating feature enables users to create custom skateboards and shoes in Roblox and later purchase them from the Vans web store in real-life – kind of like a virtual try before you buy feature.

Roblox has found out that people like to buy and trade things and bring items across different worlds. While there is much buzz around NFTs, Roblox doesn’t consider it a top priority for their immediate roadmap.

The possibilities are endless in the metaverse, but it’s clear that facilitating interpersonal and product interaction is a winning strategy.

Roblox has never really needed to market itself. It makes use of User Generated Content (UGC), which incorporates strong network effects: the more content you provide, the more valuable/sticky your service.

The platform gives tools away, translates them into the most popular languages, and hosts them all for free. Roblox then takes only a small cut of ALL goods sold. Think of the Apple store, where Apple provides the platform and takes a transaction fee on this.

Another aspect of Roblox’s virality is the great number of people that watch in-game content on Twitch, Youtube, and on other social platforms, which naturally draws new users onto the platform.

For example, they recently released a new avatar exoskeleton technology, which allows you to have a Shrek avatar on any character in any world. This may appear simple, but it isn’t, given the millions of characters with various shapes, sizes, colors, and talents. Other items may include an advertised branded jacket that can fit any avatar.

Every day, regular people create millions of YouTube videos. Roblox, keeping its primary focus on a vast community of creators, wants to make it easier to become a creator by allowing anyone to make original outfits, avatars, and accessories on their platforms.

Most professional brands attempting to enter the Roblox ecosystem begin by developing merchandise for sale, such as NFL helmets, or adding some gear to an existing experience such as the Scooby-Doo roleplay campaign. A good tip is to create a persistent experience, which means starting with an MVP (minimum viable product) and bolting on additional features once the core ideas are validated.

In short, Roblox’s business model revolves around selling Robux (platform’s in-game digital currency), licensing agreements, advertising deals, and royalties. Let’s take a look at each one of these.

For instance, Roblox and Disney partnered up in 2019 for an in-game creator event for the promotion of Star Wars Episode 9: The Rise of Skywalker. This type of experience is very effective for brands like Disney or Lego, given Roblox’s predominantly young user base.

As more people flock to these digital platforms and contribute to their depth and variety of content, the technology will in turn become increasingly immersive.

For example, in the real world, you make eye contact and nod your head when listening – this is something that is being integrated into online games. The data shows that the more realistic the in-game social interactions, the more time people spend playing.

Machine learning is increasingly being used to analyze what people do and how they interact in-game. People’s facial expressions have been studied in trials (by using webcams for instance, which can translate your expression and put it on your avatar). As a result, these teams are able to understand authentic facial cues and expressions in the context of in-game experiences.

We are poised to witness more industries and brands becoming a part of what could eventually be a sort of exodus from a physical to an increasingly immersive digital world. Wouldn’t it be great if we could watch sports like the NFL Superbowl from the point of view of any player? Or visit our nearest grocery store as an avatar dressed like Wonder Woman?

Goals for web 3.0 shopping would include how Amazon could replicate the experience of going into a real brick-and-mortar store like Target. A sizable portion of the population today enjoys in-store shopping experiences, but this will soon change as deeper immersion becomes more realistic.

Taking into account the aforementioned facts, one thing becomes clear – the future is increasingly going to be digital and immersive! This paradigm shift is in motion and is accelerating quickly. Global Metaverse revenue is projected to increase up to $800 billion by 2024. For companies wanting to stake out a piece of the digital future, there is no time like the present to begin.

CitrusBits is an award-winning creative studio with designers and developers that build many of the world’s best immersive applications and experiences.

If you are interested in designing your own game, immersive experience, or even your own corner of the Metaverse, on Roblox or on any digital platform, I encourage you to reach out for a free consultation.

Are you on the lookout for app-etizing resources on “NFTs”?