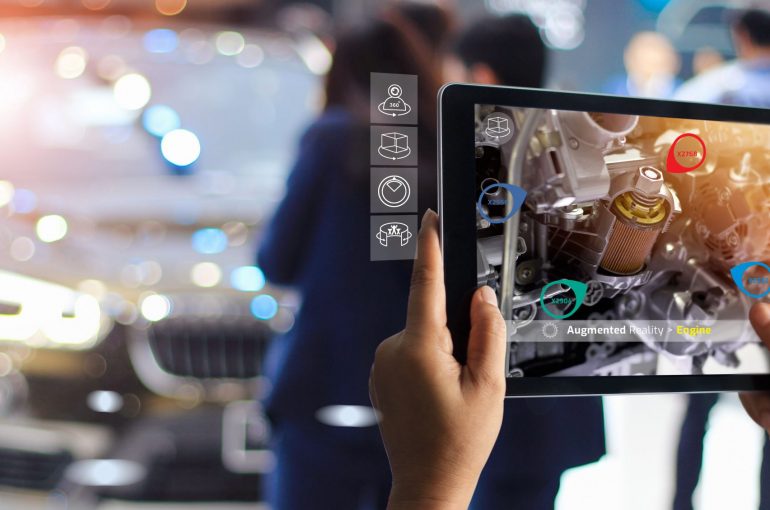 2020 turned out to be a big year for augmented reality. The year began with substantial 5G deployments that set the stage for new possibilities for AR use cases due to much-improved speed and latency. And with the global pandemic bolstering demand for digital experiences, businesses have increasingly turned to AR for entertainment, sales, and marketing campaigns, and for professional use cases as diverse as surgery, mechanical engineering, and manufacturing.

The unique circumstances have spurred industry leaders such as Apple, Google, and Unity to continue investing in AR, with the goal of providing developers with more horsepower. This has arrived over the course of the year in powerful new capabilities such as location-based anchors (based on GPS coordinates), improved computer vision and realism, and the ability for AR to interact with the real world — just to name a few.

The Big Players Continue to “Bring It”

There has been plenty of good news for AR developers, as major AR leaders like Google and Apple both released new updates for their AR SDKs. And these updates will help make AR more immersive and real than ever.

Let’s take a deep dive into these updates and what they mean for AR development.

Since its inception at WWDC 2017, ARKit has improved on many of its features. From Six Degrees-of-Freedom (6DoF) Device Tracking and Plane Tracking, after five iterations (1.0, 1.5, 2.0, 3.0, 3.5), ARKit now hosts many new features such as Body Tracking and Scene Reconstruction with new LiDAR technology (via the newest iPad Pro).

With the release of ARKit 4 and iOS 14, Apple has secured its place as the world’s largest AR platform, and it has provided developers worldwide with new tools to design riveting new AR experiences.

The latest ARKit 4 update will enable AR devs to create new and more realistic AR experiences with expanded developers’ toolkit. Not only does ARKit 4 deliver on the promise of realistic AR and convenience, but it is also believed to be the pioneering SDK for Apple’s rumored AR Glasses.

With ARKit 4, we can now place AR content at fixed coordinates in the real world determined by the latitude, longitude, and elevation. Combining the use of the visual localization feature (that uses machine learning), GPS location, and 3D map meshes captured on Google/Apple maps, the improved feature helps track your current location in the world (wherever you are) more accurately.

A possible use case for this feature? CitrusBits can use this API to create an app that places AR content anywhere in the world. For example, users could play Jenga on the Eiffel tower in Paris with multiple people across the park.

FYI – the AR apps that required image recognition or scanning a code to launch location-based experiences previously can now take advantage of the new location anchors feature and upgrade.

Apple has massively overhauled their AR accuracy and latency by pairing the hardware and software updates, allowing for fast object placement on load.

For example, in the project CitrusBits did for global animal health leader Zoetis, the machines could be placed on the table with close to no load time and no lag while the users pan around the object. This is carried out by accumulating 60 frames of depth data a second which in turn gives a denser point cloud system. This allows for faster plane recognition, providing a more accurate topological map.

This development will allow AR content to be more realistic moving forward, as a result of improved lighting and smoother frame rates. AR can be an ideal medium to show highly detailed 3D models of products, especially complex products like heavy machinery, vehicles, or electronics products. 3D models of such products in AR help your consumers understand and appreciate the engineering within your products.

The end goal of features like these is to create an immersive and powerful experience that engages, excites, and is impossible to forget.

With ARKit 4, Apple has also updated its face-tracking accuracy. By using an upgraded ‘Depth Data’ collection, the feature allows any Apple device with the A12 processor to perform fast and accurate facing tracking. This allows developers like CitrusBits to build more complex face filters that can already be used by newer iPhones on the market.

Google Ups the Ante, too

Google is committed to keeping up with its arch-nemesis Apple wherever possible. And AR is a critical battlefield.

With Google’s new update, you no longer need specific hardware to benefit from depth-sensing tools. This new depth API update creates 3D meshes of environments and leverages them to place AR objects more realistically and accurately than before, without LiDAR. This update allows for AR objects to hide behind real-life objects using ‘occlusion’.

While Apple’s expanded capabilities and updates are based more on its new sensors and processors, Google’s new AR functionality utilizes your existing smartphone camera.

Google has a different approach to AR than Apple does; it strives to innovate within the boundaries of less expensive hardware options. For instance, ARCore is compatible with phones running Android 7.0 (Nougat). That said, some of the latest Android devices like Samsung phones do have LiDAR sensors and extended capabilities.

For the most part, AR developers traditionally focused on “content overlapping”. However, this changes with the Unity MARS update. AR content is no longer just about overlapping, it is about interaction. MARS lets AR developers create augmented reality content that will not only integrate with but also interact with the real world, by default.

MARS is an upgrade and a collection of add-on applications that will aid developers in overcoming many of the problems that previously stymied the development of certain types of AR experiences consumers would welcome.

With the significant platform updates this year — some incredibly innovative and others that were pretty easy to see coming — the realm of possibility continues to expand.

As we move into 2021, we can expect AR’s largest stakeholders — namely Apple, Google, and platforms like Unity — to continue to layer on new features and enhancements, in turn allowing developers like CitrusBits to push the boundaries of AR content even further.