Top Mobile Tech News You Need To Know: May Edition 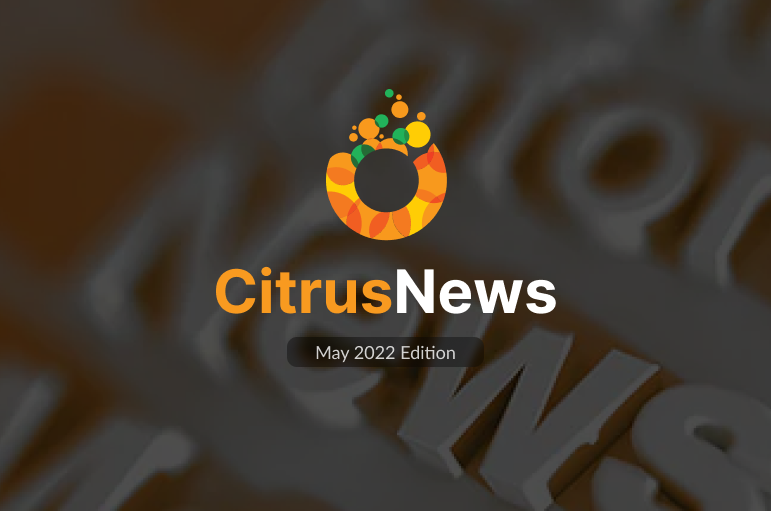 If you’re a tech enthusiast who’s unable to keep tabs on the latest updates and news surrounding the world of innovative technology, here’s another issue of CitrusNews that features all of the hottest mobile app trends and upgrades from May.

Citrus News of the Month is a fun, short, and easy-to-read format that covers the top 5 juiciest news updates in the world of tech and mobile app technology.

NFTs have been taking the world by storm, and now Instagram is gearing up for them too!

Creators on Instagram are like ambassadors of culture, inspiring millions of people around the world through this platform. With the incredible blockchain technology, we’re now going to see them leverage new tools and make a fortune.

A group of NFT collectors and creators will soon be able to showcase their NFTs on Instagram, where fans will be able to support their favorite creators by purchasing their digital collectibles—digital paintings, gifs, video clips, music, trading cards, and more —as NFTs.

The Meta CEO confirmed that the company is testing out NFTs on Instagram and plans to implement the idea with similar functionality on Facebook soon (apologies: “Meta”).

“We’re starting building for NFTs in not just our metaverse Reality Labs, but also across our family of apps. We’re starting to test digital collectibles on Instagram so that creators and collectors can display their NFTs,” Zuckerberg said.

He also announced that the company’s Spark AR, the company’s AR software platform, is currently working on 3D NFTs. These NFTs can be featured on digital platforms such as an Instagram story, as well as superimposed on a physical setting too—how cool!

Instagram Head Adam Mosseri also disclosed that the NFT integration feature is being tested out on a handful of US creators and collectors, allowing them to showcase the collectibles on their feeds, stories, and messages.

At the time of the launch, the supported blockchains for displaying NFTs on Instagram were Polygon and Ethereum, while support from Solana and Flow would also be coming soon. Moreover, compatible third-party wallets at the time of the launch will include Rainbow, MetaMask, and Trust Wallet, while Coinbase, Dapper, and Fantom will be available soon.

Do you play Pokémon Go? Also, are you an Amazon Prime member? Nodding yes to both of these questions? Hurray! Here are 30 Pokéballs for you!

Niantic’s flagship Pokémon GO has collaborated with Amazon Prime Gaming and Prime Student to deliver some exclusive, interactive Pokémon GO experiences. Trainers who are also Amazon Prime members will be able to receive a package of in-game rewards in Pokémon GO every two weeks for the next few months. 30 Pokéballs, five Max Revives, and one Star Piece are included in the first bundle.

Amazon Prime subscribers can visit Prime Gaming’s Pokémon GO page to claim your bonus. When you sign up for Prime, you’ll get a code that you may use on Niantic’s rewards page. Your stuff should appear in the game soon after that.

This isn’t the first time a well-known brand name has partnered with Pokémon GO. In the past, they’ve worked with companies including Starbucks, Sprint, McDonald’s, T-Mobile, and others.

Spotify Becomes the First Music Streamer to Launch on Roblox

Now that everyone’s making their way to the metaverse, Spotify simply couldn’t stand left behind.

Spotify announced on May 3rd that it is all set to become the first-ever music brand to establish an official presence within Roblox with the launch of “Spotify Island”— a digital space inside Roblox where artists and fans will gather and play interactive quests, unlock exclusive content, and buy merchandise from different artists.

The Spotify Island features a color palette centered around the theme colors of Spotify —green with hues of purple and orange. The island will be designed to consist of a central mainland surrounded by other themed islands, which you can explore and interact with by collecting different objects or simply walking, jumping, and running around.

Furthermore, players can also listen to different soundtracks through a musical playbox, which is powered by Soundtrap, one of the audio creation tools by Spotify. The players have the option to skip, pause, and play soundtracks here.

The in-game merch store, which will feature exclusive merchandise that can be purchased and taken to other parts of Roblox, is expected to draw a lot of attention. The creators can also offer special artist items here, which provides an additional revenue stream.

At first, users can acquire four free items by performing simple missions on the island, such as playing sounds in the crystal cave and on a trampoline, or collecting musical notes disarranged throughout the island.

Players can also collect tiny hearts around Spotify Island which will unlock hidden Easter eggs (these eggs can change your daytime mode into nighttime).

The idea behind Spotify Island is to let the players turn into creators themselves.

Niantic Reveals Campfire – A Social App for the Real-World Metaverse

People have been using online platforms like Discord and Reddit to organize meetups, in-game raids, and battles since the release of Pokemon Go.

Niantic’s games are designed to encourage people to leverage technology for going out and meeting other people through incentives. This is one of the reasons why Niantic’s AR development projects are called “the real-world metaverse”.

Campfire is a location-based social network that works with Lightship-enabled games and future apps. Campfire uses your Niantic account’s friendlist to locate your friends on a map, as well as nearby in-game events. You can host and attend meetups in person, as well as chat with other members of a group. A great example of this would be Pokemon Raid.

Campfire does not only aim to make Niantic’s games more interactive and social, but also helps developers to have their Lightship-powered apps be discovered by thousands of millions of Niantic users.

EBay Launches Its First Collection of NFTs in Partnership with Oneof

Ebay, the global ecommerce leader that connects millions of buyers and sellers across the world, became the latest company to step into the NFT business. Ebay, on May 23rd, announced the launch of its first collection of NFTs in partnership with a web3 platform—OneOf. OneOf is a premier green NFT platform for communities around music, sports, and lifestyle.

“NFTs and blockchain technology are revolutionizing the collectibles space, and are increasingly viewed as an investment opportunity for enthusiasts,” said Dawn Block, VP Collectibles, Electronics, and Home at eBay. “Through our partnership with OneOf, eBay is now making coveted NFTs more accessible to a new generation of collectors everywhere. This builds upon our commitment to deliver high passion, high value items to the eBay community of buyers and sellers.”

‘Genesis’, Ebay’s first-ever NFT collection, will feature 3D and animated interpretations of the iconic athletes featured on Sports Illustrated covers over the years. The collection consists of 13 limited-edition digital collectibles categorized as green, gold, platinum, and diamond NFTs. The prices start at $10 for everyday fans, featuring a 3D animation of Gretzky making a signature move on the ice.

Ebay explains that its first-ever collaboration in the NFT space is driven by the surge in the collectibles market.

The tech space is constantly stirred up with exciting innovations and advancements. To keep up with all of it, stay tuned for our monthly CitrusNews.

At CitrusBits, we have designed and developed impactful mobile applications for renowned business entities, including Burger King, Quiksilver, DuPont, and Erupt, as well as helped small, solution-oriented ventures and startups like IrisVision, Leefco, and Jobflare disrupt their respective industries.

If you’re looking to develop a unique mobile application for your business, we’d love to learn more over a free consultation call.