35 Essential Augmented Reality Stats, Facts, and Trends for 2022 and Beyond 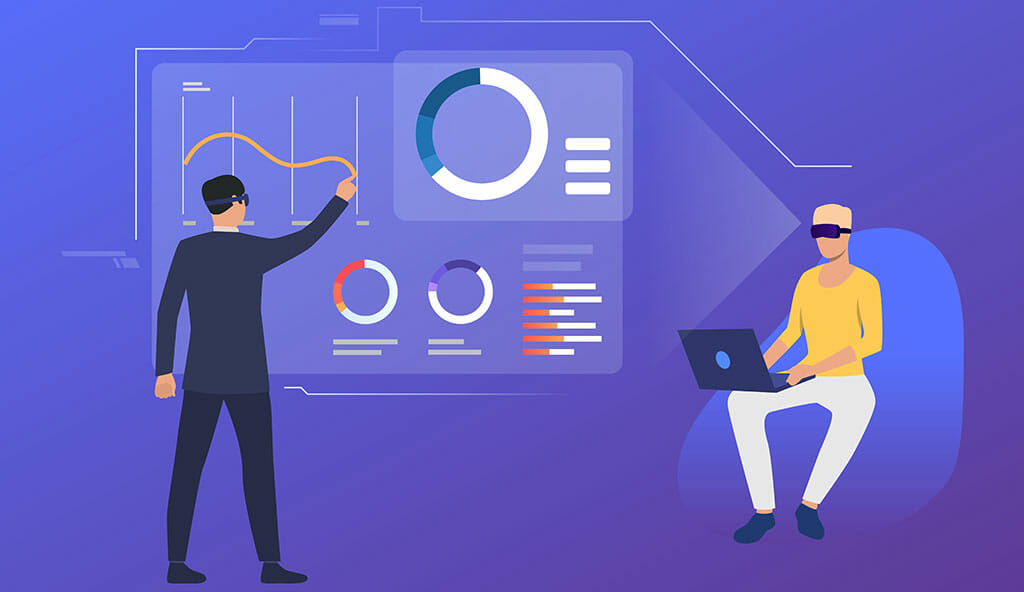 Over the past couple of years, the augmented reality market has continued its meteoric rise as a mainstream technology. With applications like Navion, WayRay’s augmented reality navigation system for cars, and Google’s AR-enabled Maps update, augmented reality (AR) is pushing the boundaries of what is possible into new and powerful directions.

Looking at what the trends suggest, augmented reality will not be limited to one or two novelty use cases the way it has been in years past. It will be everywhere and will touch every industry. So, if you are someone who wants to leverage this technology, the odds are in your favor.

Check out these eye-opening stats and facts about augmented reality, and gain a better understanding of where the market is headed.

Depending on who you talk to, the AR market could be anywhere between $60-198 billion within five years. Here are some of the forecasts.

Augmented reality will soon out perform its counterpart markets. It’s all huge numbers from here on. By the year 2023, the AR market could be $61.4 billion USD!

2. The number of smartphone augmented reality users is expected to exceed 3.5 billion by 2022. (Digicapital)

In other words, 44% of the world’s population is anticipated to use AR over the next few years.

AR offers a rare opportunity to find consumers and to direct the buyer’s focus on selling points of your products.

4. According to the Forrester report, it is projected that 14 million American employees will likely use smart glasses on a daily basis in their workplaces by 2025. (Kommandotech)

Industry 4.0 apps that incorporate AR are expected to be a powerful catalyst for this growth.

By 2023, we would have made enough progress to see AR reach $94.4 billion, with high demand for AR & VR in the Retail and eCommerce sector.

When you hear AR and gaming in a single sentence, your mind instantly goes to Pokemon Go. Just so you know, the game has been downloaded over one billion times by now and is estimated to reach a revenue of $1.2 billion. Not only that, the overall AR gaming industry shows a compound annual growth rate (CAGR) of 152.7% for the forecasted period 2017–2023.

Have an amazing AR game idea? Talk to experts in our AR app development hub to create the next great AR game.

7. Since the beginning of 2020, AR engagement has accelerated by almost 20%, with conversion rates pushing up by 90% among users who engage with AR as opposed to those who do not. (Retail Customer Experience)

AR video games are expected to generate 11.4billion in revenue by 2025.

Within six months of when ARKit launched, ARKit-based app downloads reached a whopping 13 million! These downloads were mostly concentrated around a few App Store categories, leading with games, utilities, and lifestyle apps. 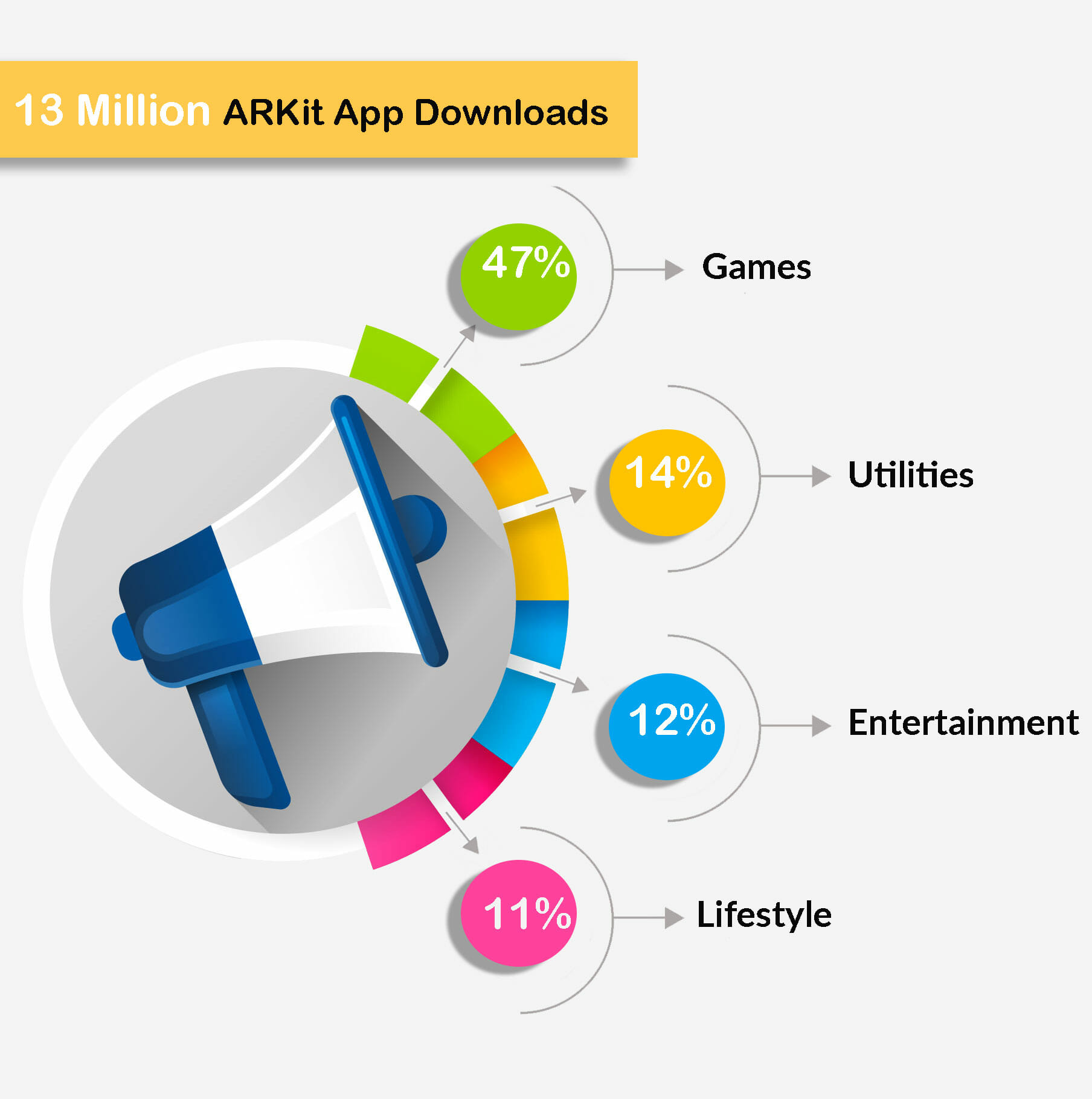 9. AR has a better future on mobile than VR. (TechCrunch)

AR and VR, two similar technologies that provide very different user experiences, are both capable of completely transforming gaming and entertainment experiences in ways that were—until now—impossible. AR has managed to surpass VR because of its boundless potential on mobile, requiring no cumbersome setup or expensive hardware. All thanks to Google and Apple with their augmented reality software development kits and willingness to back the emerging technology.

VR fares better on console and PC rather than mobile, where AR currently shines.

10. 32% of consumers use augmented reality, and 73% of mobile AR users reported either high or very high satisfaction with mobile AR experiences. (Wikitude)

11. Consumers are highly optimistic about emerging technologies, with 90% saying that AR is “fun. (Finanzen)

Augmented reality does make everything interesting and easier. For instance, many brands like IKEA are offering AR experiences like ‘Try-before-you-buy’ to make furniture shopping easier. With AR in the picture, you don’t have to purchase regrets for your living room.

The consumer appetite for AR is growing and with advances in ARKit and AR Core, the number of smartphone AR users has almost doubled.

The AR and VR headset market hit 8.9 million units in 2018 and is expected to reach 65.9 million units by 2022, fueled in large part by next generation headsets from Apple, Google, and others.

14. Different analysts have estimated significant increases in both AR and VR headset revenues over the upcoming years, with both technologies projected to sell more than 26 million units a year by 2023. (Statista)

To quote Tim Cook, AR engagements will likely become everyday occurrences. As consumers become more familiar with AR, retailers will have to adapt and change to keep up with how the demand is shifting.

AR is not only dominating the smartphone world, it has grown strong roots in the smart glasses realm as well. By the year 2022, the AR glasses market is expected to reach 22.8 million sold units. 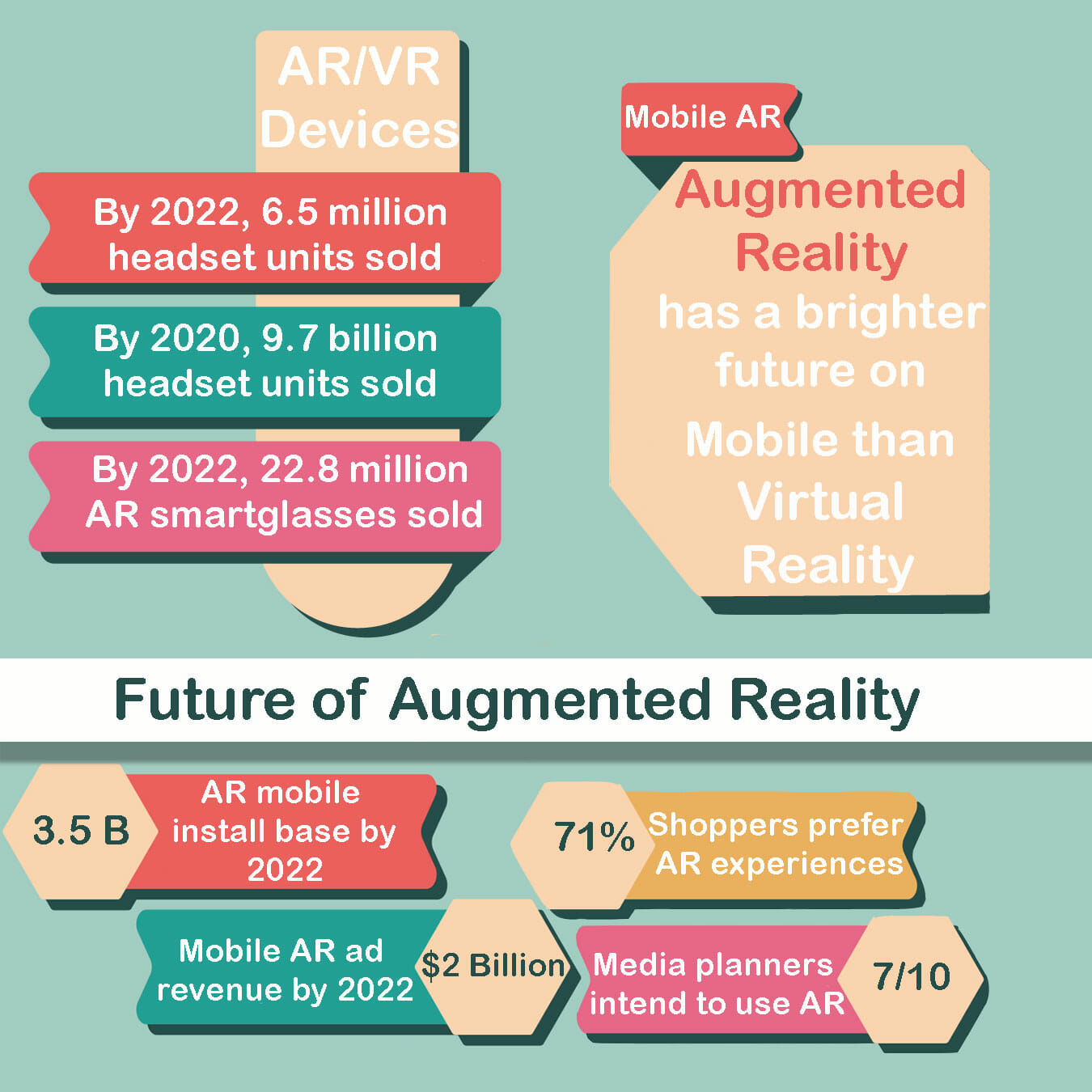 16. You will soon be able to experience AR in Audi, Mercedes-Benz, Tesla, Toyota and Volvo cars. (Road Show)

Just as AR has become an integral part of mobile experiences, it will soon become essential in cars as well. In-car AR was one of the biggest trends in 2019 with Nvidia’s DriveAR platform being the highlight.They used a dashboard-mounted display overlaying graphics on camera footage from around the car, pointing out everything from hazards to historic landmarks along the way. Following their example, Audi, Mercedes-Benz, Tesla, Toyota, Volvo — all automotive giants — have signed up to work with the technology.

17. WayRay set on using AR to take the driving experience to a whole new level. (Forbes)

WayRay, a startup backed by Alibaba, has taken the route of projecting AR data directly onto a car’s windshield, enabling navigation prompts, right-of-way information, lane identification, and hazard and object detection and so much more.

We are three steps closer to all those mind-blowing cars we have been seeing since movies like Minority Report came out.

Porsche and Hyundai along with the automotive brand JVC Kenwood and other companies have invested up to $80 million in the AR tech developed by the Swiss firm WayRay.

Want to hear about something other than entertainment and games? How about AR curing phobias (or acute fears, for example, a fear of water). AR has become one of the most popular forms of therapy that are practiced worldwide to treat different phobias.

20. AR’s magical effect on our brains – the science behind the excitement and pleasure. (Mindshare)

In a study conducted by Mindshare, it was found that the area in our brain dedicated for encoding memory generates three times more activity from AR content than it generates from non-AR content. So yes, there is a scientific basis for the fact that AR is more stimulating and engaging than traditional media content.

Among other opportunities introduced by augmented reality, the healthcare sector is well benefited by AR, with rising demand in innovative diagnostic techniques, neurological disorders treatment, and increasing disease awareness.

67% of executives in advertising agencies say they look forward to using AR more. Among those, 29% of these have served clients by creating AR digital campaigns.

One winning argument for using AR in marketing is that it proves a solid approach to prevent people from blocking ads.

23. 7 out of 10 media planners want to use AR to boost advertising and customer engagement. (Deloitte)

In a research report conducted by Deloitte on companies generating revenue between $100 million to $1 billion, it was found that most of them were inclined towards experimenting with AR in various forms to increase business growth.

Mobile AR has the potential to generate $2 billion in revenue in the next 2 years, much of which is expected to come from Snapchat and Facebook advertising.

25. About one-seventh of the entire world’s population are AR users. (Augmania)

Think this fact is exaggerated? Take a second and think about mobile users around the world. Now, think about the people who use Facebook, Snapchat, or Instagram.

Again, that is everyone on your contact list, your friend’s list, and so on. These are all the people who are using AR, many without even realizing it! And sure enough — it amounts to one-seventh of the entire world population. 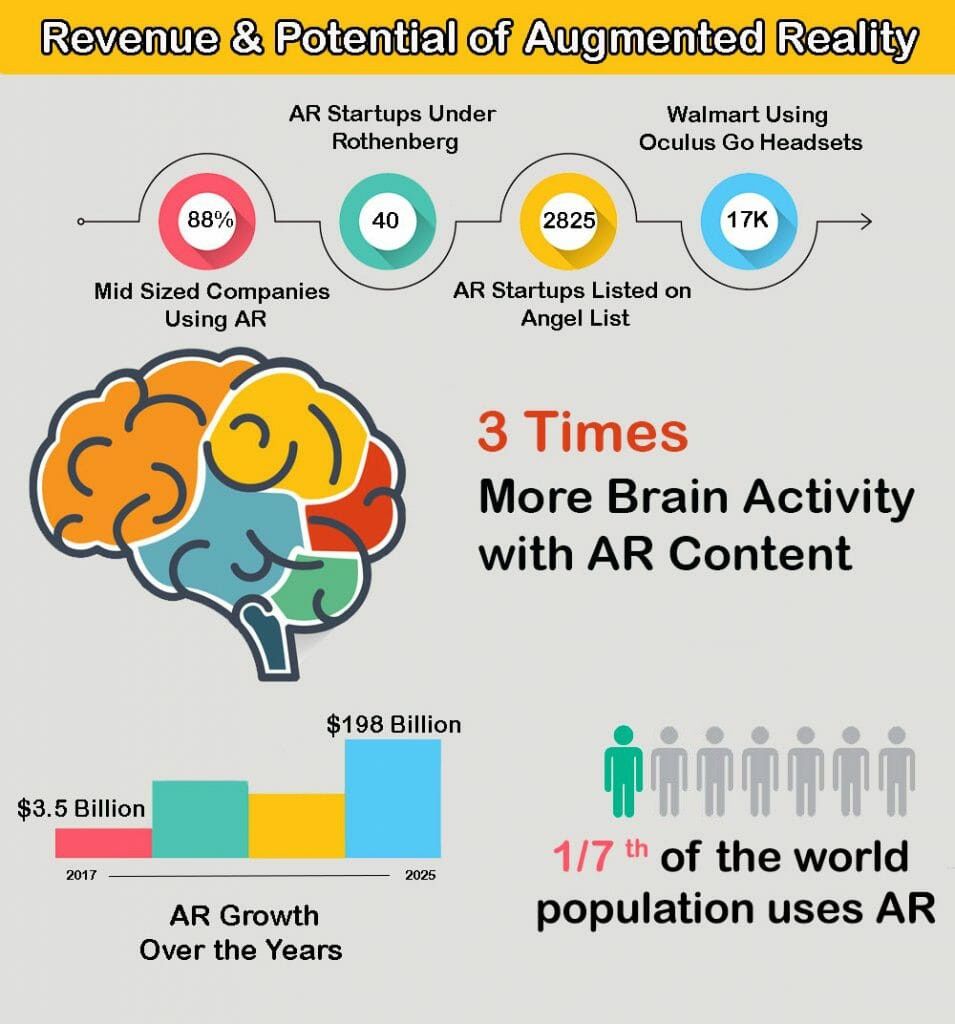 AR-enabled Android smartphones showed a jump from 100 million to 250 million users, in large part thanks to Google’s ARCore software development kit, which makes it easy for app developers like CitrusBits to create AR experiences for Android apps.

As noted in numerous other statistics, the AR and mobile smartphone combo has proven to be effective.

29. Results of a survey reveal that 60-70% of consumers see clear benefits in using AR with other technologies. (TheMotleyFool)

Technologies integrating with each other often perform even better. AR paired with IoT could be the next best thing as 70% of consumers seem convinced of the benefits of the two combined.

Although about half of Americans use augmented reality without realizing it.

Not just limited to games and shopping, AR seems to be well integrated into the corporate sector. 88% of mid-level organizations are already using AR in different capacities. Is your company one of them?

32. Rothenberg Ventures Is one of AR’s biggest backers. (VOX)

Rothenberg Ventures has been showing AR quite some love. According to Redcon, the VC has invested in almost 40 AR/VR ventures. If you are starting up an AR business and are looking for an investment, Rothenberg should be near the top of your list.

33. There are 2,825 companies listed as AR startups in the Angel list (Angel)

Every year we see new startups in different niches. At the time of this writing, there are 2,825 companies listed in the Augmented Reality category on the Angel list.

Walmart, a pioneer in many tech-forward areas of its business, decided to use 17,000 Oculus Go headsets to train its employees on new skills ranging from compliance to customer service.

Although the adoption rate for AR/VR devices is relatively low when compared to more established consumer technologies, many of the world’s biggest tech companies understand what the future holds and are allocating substantial R&D budgets to develop their capabilities.

Microsoft is particularly well-invested in the technology, with the company owning over ten thousand AR/VR patents across thousands of patent families. Intel and Sony are among other tech giants that stand at the technological forefront of augmented and virtual reality.

The very fact that so many influential tech companies are so heavily invested in AR serves as somewhat of a self-fulfilling prophecy — their investments will ensure that AR experiences continue to develop and find meaningful places in the fabric of our society.