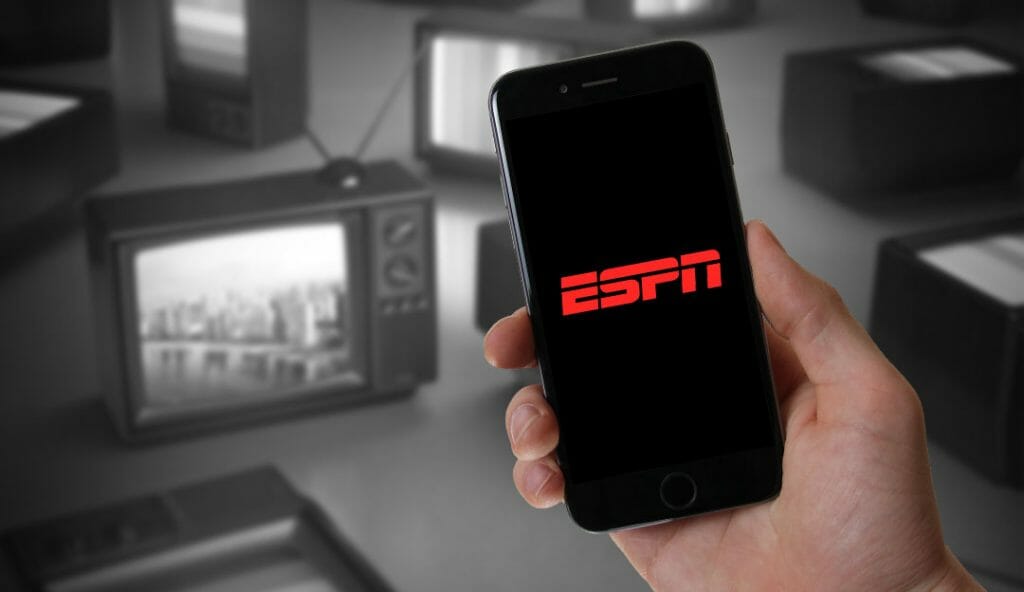 Just don’t tell that to ESPN, Bristol’s largest corporation in residence, which has shown impressive tech chops as of late.

ESPN’s flagship mobile application, the ESPN app, is a perennial #1 in the sports category and has especially impressed analysts and observers alike recently – showing 25% growth in unique users year-over-year (YOY) and 39% growth in time spent using the app YOY, according to ESPN Pressroom.

ESPN, the sports media conglomerate founded in 1979 and owned by Disney Media, is no traditional tech company.

It’s a proven strategy that generates around $8 in affiliate revenue per month from every single cable subscription that includes ESPN, comprising the majority of ESPN’s revenue.

The Inevitable Shift into Digital Products

As straightforward as ESPN’s core business has been, the company is currently facing challenging macroeconomic trends.

There has been a steady decline in cable TV subscriptions for much of the last decade – also known as “cord-cutting” — mostly attributable to the rise of the Internet and video-on-demand (VOD) platforms like Netflix and Hulu. More generally, consumer preferences have shifted from “push” content (like TV and radio) towards “pull” or on-demand content (like websites, mobile apps, and video-on-demand) entertainment.

Just as newspapers like the New York Times and Washington Post have done in the digital era, ESPN has attempted to counteract cord-cutting by investing more into its web/digital products.

The ESPN.com website has been a clear focus for the company, having gone through many iterations and now representing a robust platform for pretty much all things ESPN: scores, news, videos, streaming, podcasts, fantasy sports, and more.

But, doing what everyone else is doing in – from Bleacher Report and Fox Sports to The Ringer, Deadspin, and the myriad of other sports media businesses — isn’t a great recipe for long term success. Everyone “gets” websites, and so everybody is putting a lot of resources into them.

Hence ESPN’s decision to move boldly into an adjacent but even faster-growing market: mobile apps.

To be clear: in 2019, ESPN is no stranger to the world of mobile apps. It has been dabbling in apps for almost a decade, with apps such as Scorecenter in 2009, WatchESPN in 2011, and ESPN Sportscenter in 2013.

But when the most current iteration of the ESPN mobile app (iOS/Android) – simplified to just “ESPN app” — launched in April 2018, it seemed that ESPN was finally onto something with game-changing potential.

As of early 2019, the ESPN app has more than 18 million unique users and boasts YOY user growth of 25% and a whopping 39% YOY increase in time spent in the app (1.8 billion minutes).

Let’s take a look at several key characteristics of the ESPN app that have contributed to its recent success.

The ESPN app makes exemplary use of personalization to ensure that each user’s experience is perfectly tailored to his or her favorite sports and teams.

When you first begin using the ESPN app, you’re guided to select your favorite sports and sports teams.

This onboarding process ensures that you get a personalized experience, which mainly manifests itself in a few notable ways:

When ESPN first dipped its toes into the app market almost a decade ago, its initial apps were highly fragmented. A WatchESPN app (2011) allowed authenticated streaming of live content, and a separate Scorecenter app (2009) provided live scores. The later Sportscenter app (2013) brought a more substantial feature set around scores, stats, news, and highlights, but the product still felt like “ESPN Lite” to many.

The present-day app is more all-encompassing.

While scores, news, and highlights remain core to the experience, the app now puts live streaming and video-on-demand (VOD) features on an almost even footing.

If a user has a cable or streaming subscription that includes ESPN, he or she can authenticate that subscription on the ESPN app and begin viewing nearly all of ESPN’s broadcast content via the app.

In June of 2019, ESPN finally killed off the WatchESPN app, which had been made redundant by the updated ESPN app.

ESPN’s platform approach isn’t just about eliminating confusion and streamlining its app offerings in the App Store and on Google Play; it’s also about unlocking synergies that exist between each service on the platform.

For instance, as a user is viewing a box score or scoring summary of a game in progress, he or she can also begin watching that event live, with the click of a video thumbnail.

In the end, a platform approach results in a better, more convenient user experience, and that’s why it’s paying off with the ESPN app.

Costing $4.99 per month, ESPN+ was launched in 2018 as a reimagined take on the company’s premium subscription, once known as ESPN Insider. ESPN+ goes beyond ESPN Insider, however.

It is, by virtue of offering this standalone VOD and streaming package, ESPN’s hedge against cord-cutting. Importantly, ESPN+ does not grant viewing rights to content that is already broadcasted on ESPN cable channels, eliminating the risk of cannibalization (of ESPN’s cable affiliate revenues).

ESPN+ is a significant opportunity for the company, with internal expectations of the ESPN+ subscriber count reaching 12 million by 2024, representing more than $700 million in annual revenue at that stage.

In 2018, ESPN secured the rights to air all UFC mixed martial arts (MMA) events beginning in 2019 (for five years) and promptly attached the majority of the main fight events to the ESPN+ calendar. While the arrangement did not come cheap for ESPN ($1.5 billion), it already seems to be paying off. ESPN+ reportedly picked up half a million subscribers the Friday and Saturday before the first UFC Fight Night hosted on ESPN+ and is currently sitting at more than two million subscribers (as of February 2019).

ESPN is depending heavily on its mobile app to deliver a sublime experience for ESPN+ subscribers, in order to have hefty investments (like the UFC deal) pay off.

Will the Clutch Performance Continue?

The road back to stable profitability will not be an easy one for ESPN, with the strength of the cord-cutting movement working directly against ESPN’s core business.

As the company’s affiliate revenues continue to decline, there will inevitably be suspense around whether the mobile app and ESPN+ strategy will be too little, too late.

Yet, in large part because of ESPN’s most recent mobile app and ESPN+ numbers, the company has plenty of reasons to be optimistic about its prospects. After all, for a company that has covered many of the most clutch moments in sports history, ESPN certainly might have a clutch move or two left in crunch time.

As baseball legend Yogi Berra said before his team rallied to win the 1973 National League pennant, “It ain’t over ‘til it’s over.”

CitrusBits is an award-winning mobile app development agency with extensive mobile app experience in the sports and entertainment categories, including an exciting new fantasy sports app (Champions Round – coming soon), a live sports sweepstakes app (The Winning Seat), and apps for numerous social media influencers (such as FullyRaw Kristina). If you are interested in collaborating on an app, please get in touch.