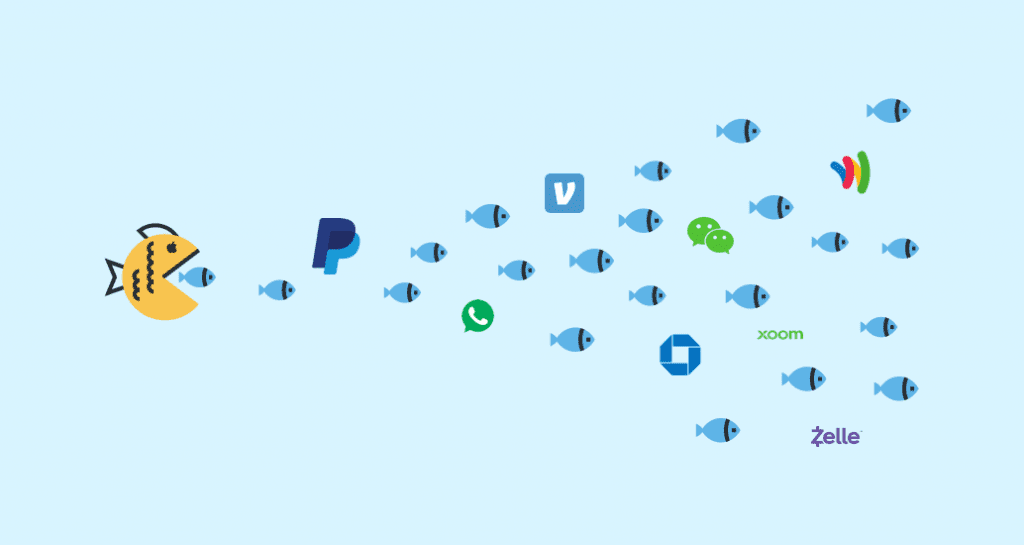 Apple Pay Cash: “Venmo Killer” or Too Little Too Late?

Earlier this week, Apple launched Apple Pay Cash, its new peer-to-peer (P2P) payment service for iPhone and iPad users. Were there trumpets blaring, euphoric cheering, and the Hallelujah chorus? Not quite. A quick look at trending topics on Twitter gives zero indication the service has even launched.

Available in the latest iOS 11.2 update, Apple Pay Cash purports to offer everything Venmo, Square Cash, and other P2P payment services provide, seamlessly and conveniently integrated into Apple Messages. If Apple can use Apple Pay Cash to crack a P2P payments market that is expected to cross more than $200 billion by 2020, it’s sure to be a big deal.

So, why the crickets?

There are an estimated 700 million iPhone users worldwide. If even a quarter, let’s say, of these are getting regular iOS updates, that means 175 million iPhones will have Apple Pay Cash ready to go on their phones in short order, automatically.

By comparison, the Paypal P2P service, Venmo, has 7 million users – impressive in its own right – but paltry next to numbers like 700m or 175m.

The potential opportunity for Apple is to get tens or hundreds of millions of people using Apple Pay Cash because of the convenience and trust associated with having the P2P payments system be native to their iOS user experience and available without a separate app install.

These convenience and trust factors could help Apple upset the balance of power in the P2P payments market, away from current leaders such as Paypal and Zelle. But, will they?

Lack of Android Support Could Work Against Apple

Yes, Apple Pay Cash can potentially be used on hundreds of millions of iPhones (those that support iOS 11.2) in use around the world. That’s not a number to scoff at.

But, what about Venmo? Venmo can be installed and used on pretty much any of the two billion+ smartphones in the world, including both iOS and Android devices.

A true Venmo killer would have to offer Android support to have a shot at becoming the de facto way people sending money to each other on their phones. Until Apple Pay Cash does this (if it ever does), it can only threaten to steal market share from a limited segment of the existing P2P market. And, until that happens, Paypal execs will probably not be losing too much sleep over Apple Pay Cash.

Why Apple Could be Late to the Game

Venmo’s 7 million users may sound like a small number, but when you consider that the vast majority of them are highly coveted millennials, and that Venmo processed more than $18 billion in payments in 2016, you can comprehend why Venmo is seen as the top dog in the P2P payments market by a considerable margin.

But, you might say, Apple has already proven it can disrupt entire markets when it nonchalantly adds a new feature to iOS. There used to a thriving market of third party flashlight apps on the App Store that has been laid waste to by iOS’s native flashlight addition.

To understand why the P2P payments market is notably different than the flashlight app market, though, we need to examine a market phenomenon known as “network effect.”

Network effects exist when the value derived from using a product or service increases when more people also use that product or service. The classic example of network effects involves online auction sites such as eBay. The more people use an auction site, the better the merchandise selection, and the better the chances are for a seller and a buyer to find each other at a price both can agree to. Network effects are exactly why Ebay hasn’t had much trouble fending off competitors in the online auction space over the past two decades.

Venmo’s strong adoption among millennials means that there are already strong network effects at play that will make it difficult for Apple Pay Cash to steal market share away from Venmo.

In this case, it would have made sense for Apple to enter the market earlier, before competitors like Venmo were able to gain a critical mass of users and take advantage of strong network effects among millennials.

CitrusBits is a Los Angeles-based mobile app development agency that builds award-winning mobile apps for fresh startups and some of the world’s best brands, including Burger King, Quiksilver, and Symantec. If you’re ready to begin building the next big thing, or if you’d like to update an existing mobile app, we’d love to hear from you.